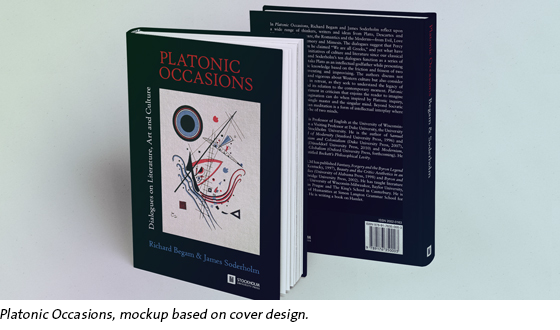 An experiment in criticism inspired by Platonic inquiry
What have we learned about the initiatives of culture and literature since our classical predecessors?

In Platonic Occasions: Dialogues on Literature, Art and Culture, Richard Begam and James Soderholm reflect upon a wide range of thinkers, writers and ideas from Plato, Descartes and Nietzsche to Shakespeare.

Begam and Soderholm’s ten dialogues function as a series of dual-meditations. The dialogues suggest that “We are all Greeks,” and yet questions what we have actually learned about the initiatives of culture and literature since our classical predecessors. Platonic Occasions is an experiment in criticism in a form of intellectual interplay where the authors invite the reader to imagine what the dialogic imagination can do when inspired by Platonic inquiry.
Platonic Occassions is the first volume in Stockholm English Studies (SES), which is a peer-reviewed series of monographs and edited volumes published by Stockholm University Press.

JAMES SODERHOLM has taught literature and aesthetics at the University of Wisconsin-Milwaukee, Baylor University, Charles University in Prague and The King’s School in Canterbury. He is currently Professor of Humanities at Simon Langton Grammar School for Boys in Canterbury.

Where to access the book
At Stockholm University Press’ website you can download an epub-file, pdf-file and read the book online or can access your books on multiple devices. On the website you can also order a printed copy of the book.

About the publisher Stockholm University Press
Stockholm University Press (SUP) is an open access publisher of peer-reviewed academic journals and books. We aim to make journals and books affordable, and to give them the widest possible dissemination so that researchers around the world can find and access the information they need without barriers.