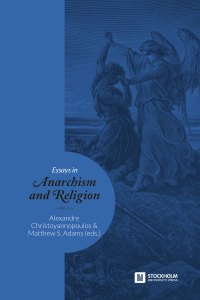 Anarchism and religion have historically had an uneasy relationship. Indeed, representatives of both sides have regularly insisted on the fundamental incompatibility of anarchist and religious ideas and practices. Yet, ever since the emergence of anarchism as an intellectual and political movement, a considerable number of religious anarchists have insisted that their religious tradition necessarily implies an anarchist political stance.

Reflecting both a rise of interest in anarchist ideas and activism on the one hand, and the revival of religious ideas and movements in the political sphere on the other, this multi-volume collection examines congruities and contestations between the two from a diverse range of academic perspectives.

The second volume of Essays in Anarchism & Religion includes essays covering themes such as Yiddish radicalism, Byzantine theology, First Peter, William Blake, the role of violence in anarchism and in Christian anarchism, Spanish anarchist-themed film, and the Occult features of anarchism.

In a world where political ideas increasingly matter once more, and religion is an increasingly visible aspect of global political life, these essays offer scholarly analysis of overlooked activists, ideas and movements, and as such reveal the possibility of a powerful critique of contemporary global society.

The editors of the book

Essays in Anarchism and Religion: Volume II is the fourth volume of Stockholm Studies in Comparative Religion, a peer-reviewed series of monographs and edited volumes published by Stockholm University Press.

At the Stockholm University Press website you can download an ePub or pdf-file that allows you to read the book online or access it on multiple devices. You may also also order a print copy of the book through the website. https://doi.org/10.16993/bas License: CC-BY

About the publisher Stockholm University Press

Stockholm University Press (SUP) is an open access publisher of peer-reviewed academic journals and books. We aim to make journals and books affordable, and to give them the widest possible dissemination, so that researchers around the world can find and access the information they need without barriers.