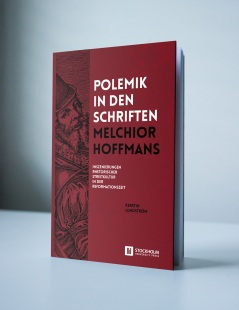 The way in which Reformation conflicts were carried out by the leading clerical Reformers has been studied in depth, but those at the margins of the Reformation have often been neglected.

Polemik in den Schriften Melchior Hoffmans. Inszenierungen rhetorischer Streitkultur in der Reformationszeit, by Kerstin Lundström is a study of pamphlets written as a reaction to, and attempt for, expansion of the Lutheran and Zwinglian Reformation. Melchior Hoffman’s work has, so far, almost solely been investigated by historians of religion and thus focused merely on religious topics and argumentation.

The study focuses on the literary qualities of the texts and it is the first full-length study on Melchior Hoffman by a literary scholar. Not only has little been written on Melchior Hoffman, but also about lay writers in the Reformation at all. Thus, the book delivers new perspectives within the field of Reformation pamphlet writers. It provides a unique approach to texts from the 16th century, which can easily and reasonably be applied to polemical texts of the 21st century as well as to even older texts than Hoffman’s.

The book has been written in the research field of German Literature, but will be of great interest for both literary scholars and historians (of religion or culture).

Inszenierungen rhetorischer Streitkultur in der Reformationszeit is the first volume in Stockholm German and Dutch Studies (SGDS), which is a peer-reviewed series of monographs and edited volumes published by Stockholm University Press.

At Stockholm University Press’ website you can download an epub-file, pdf-file and read the book online or access your books on multiple devices. On the website you can also order a printed copy of the book.

About the publisher Stockholm University Press

Stockholm University Press (SUP) is an open access publisher of peer-reviewed academic journals and books. We aim to make journals and books affordable, and to give them the widest possible dissemination so that researchers around the world can find and access the information they need without barriers.